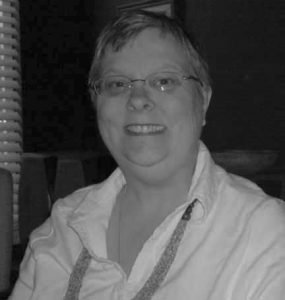 Janet M. Perry is the Internet’s needlepoint expert. She puts into practice her motto to make needlepoint fast, fun, and affordable.

Her exciting email classes, projects, stitch guides, and books have legions of fans worldwide. She has written 15 books for needlepointers. Her blogs, including Nuts about Needlepoint, are full of exciting needlepoint information. Her friendly approach helps stitchers at all levels create beautiful creative works of art. In addition to her writing and teaching she is the leading designer of charted tartans for needlepoint or cross stitch & has written hundreds of stitch guides and dozens of original projects.

Colorful Needlepoint is her first membership site. It’s a place for projects, referenve, community, and education.

I began stitching in 1970, just before I turned 14. It was as if needlepoint found me. I loved it immediately and have done so ever since. I was an adventurous needlepointer from the beginning, trying new stitches, designing my own patterns, adapting pictures to needlepoint, and stitching with any thread I could get my hands on.

From 1997-2001 I was the Needlepoint Guide for About.com, building it up into a comprehensive and current site for needlepoint knowledge. Since 2001 I have worked as an independent designer, creating projects, stitch guides, and books. They’re always designed to give you more than what you need to stitch that canvas. They’ll give you ideas, knowledge, and stitches you can take to other projects.

My basic needlepoint philosophy is that needlepoint should be fun and easy. I also believe that needlepoint stitchers have been kept in the dark by snobbish stitchers, expensive classes, and a feeling that there is a “special club” you aren’t a part of. I have developed many techniques which allow even beginning stitches to do ‘difficult’ techniques, and my knowledge of needlepoint allows me to draw on so many different ideas.

There isn’t a needlepoint technique I haven’t tried at least twice and I’ve stitched with almost everything that can be threaded on a needle. I welcome designers, shops, and individuals as clients.

An avid reader, Janet makes her home in the San Francisco Bay area with her husband son, and cats.